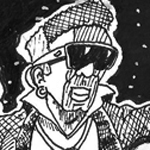 Jamboree Jones carefully aligned the first laser beam exactly perpendicular to the driveway. He aimed the second laser directly at Herbert Kohl’s huge stainless steel belt buckle bearing the image of Jayne Mansfield. Herbert sat in his wheelchair at the far end of the drive – one hundred and one meters away according to the laser’s range finder.

“Yo! You ready?” shouted Jamboree.

Herbert wiggled, stretched his fingers and settled into his chair. “Ready.”

Jamboree dropped his arm, and Herbert pushed the chair’s control lever hard forward. He bent low to reduce wind resistance, his Native American headdress streamed out behind him. The chair’s electric motors screamed from the effort.

The timer on the laser stand counted the seconds until Herbert and his chair broke the second beam. He hit the brakes and circled back towards Jamboree.

“Shit, that’s too slow.” Herbert hopped out of the chair, walked to the back and began checking the electrical connections.

“Of course I can walk. Nothing requires me to be a helpless cripple.”

“Why do you ride in the chair, then?”

Herbert sighed and shook his head. “Riding is easier than walking, and the girls have sympathy for me. Some of them even get turned on by the idea of sex in a chair.”

“But the main reason is that by self-identifying as an otherly-abled American, I get a nice check.”

That boy ain’t the only one who knows that trick. “Well, I gets a crazy check my own self.”

Herbert smiled. “Nothing says you can’t get more than one.”

“You get two checks for that chair?”

Herbert shook his head. “No, I get a second check for self-identifying as a Native American. You don’t think I like wearing this stupid headdress, do you?”

“No, I hope not. You look like you’re out of some old cowboy movie.”

“Hop on the foot rests and I’ll ride you back to the garage.”

Before Jamboree entered the garage, Herbert made him put his phone into a box beside the door. Herbert put his own phone inside, too.

“Don’t want the Guardians seeing what’s inside,” he said.

Jamboree nodded. “Ain’t none of their business.”

The door opened to a wholly amazing world. Electronic devices filled long tables illuminated with the soft glow of diode lighting, test equipment lined one wall, and in the back sat an old, red car.

Herbert spun his chair. “Now, you came here wanting something – what?”

Jamboree thrust out his chest. Finally, getting to the point. “I need a new girlfriend, and I’m thinking of getting next to Shamika Afolabi. She looking fine.”

Herbert scratched his head. “I don’t know how I can help with that. The only girls I get have pity on me. Why don’t you get Miz Mimosa to cast a spell? She’s a root doctor, isn’t she.”

“Yeah, but a new car will cast a better spell on Shamika than any of those roots and potions.”

“Ah, now I see. You want one of my highjackers.”

After a bit of discussion, Jamboree satisfied himself that he had beaten Herbert down on the price. He handed over some bills and took possession of a tube that looked like a restaurant salt shaker.

“See the button on the side?” asked Herbert. “Push that to turn it on, then point the top towards a car. Give it a few seconds, and when the green light glows in the bottom, the car is hacked. The doors will already be unlocked. Get in and push the start button on the dash. The car will think the owner’s chip is inside and will unlock the wheel and crank the engine. Then you just drive.”

“Just be sure the car is a few years old. Don’t try it on a brand new one.”

That afternoon, Jamboree rode his hoverboard to the Skyway Express station on the Southbank. Rich people parked their cars there and rode the monorail to their jobs in town. Should be a good place to get an expensive car.

Jamboree stood on the sidewalk outside the parking lot until he saw the security bot pass by on its rounds. He grinned. One of the old, slow bots. He’d have plenty of time.

He rode up and down the rows until he found the perfect vehicle – a year-old, midnight blue Cadillac. He turned on the hijacker, waited for the green light, then climbed into the driver’s seat. White leather interior. Yeah, this car is cool. He pushed the ignition button, the engine started and he shifted into reverse.

As he drove out, a scanner detected the parking decal and raised the gate. The bot built into the gate shouted “Have a good remainder of your day, sir.”

After a couple of blocks, Jamboree turned left onto the Acosta bridge and made his way into downtown.

Jamboree took the ramp to Broad Street and stopped at the traffic light. His heart jumped when someone banged on the passenger window. Shit, Ozzie. What’s that old bastard up to?

Ozzie signaled for him to unlock the door, then climbed into the passenger seat. He did that hand waving thing from his forehead to his chest, the move that the Arabs do in the old movies.

“What the fuck you want, Ozzie? I’m not sure I want to be seen with you. What’s with the lime green shirt and pants as pink as the icing on a cupcake?”

“And with you being less than five-feet tall, you look like a Puerto Rican gaywhore strolling Philips Highway for a child molester.”

“And I suppose you prance through the Land of Fay, handing out prophesies and such, yo.”

“And probably stealing whatever you can get your hands on.”

“What do you want with me?”

“I’d like a ride in this fine automobile to The Landing. I have some appointments with tourists there.”

“Appointments to pick-pocket they asses. Anyway, I’ll take you there, but first I’ve got to ride past the college. There’s a girl about to get out of class, and I want her to see me in my new car.”

Ozzie frowned. “A girl who’s impressed by a car. You’d be better off getting Miz Mimosa to cast a spell.”

Jamboree cut over to Kings Road and slowed as he neared the college’s Sociology building.

“Get down in the floor,” he said to Ozzie. “I don’t want anybody seeing your green shirt wearing ass.”

Jamboree pushed the button to lean the seat back into the proper, cool gangsta position. He stared straight ahead, but widened his peripheral vision to see the people on the sidewalk.

There was Shamika. She gave him a little wave, and Jamboree lifted his chin in acknowledgment. Once. After passing, he looked in the rear view mirror and thought she walked with a bit more hip swing.

He turned off of Kings Road and accelerated towards The Landing.

“Yeah, ain’t nobody important around here.”

Ozzie was fastening his seatbelt when the doors locked and the car turned onto a different street.

“What the hell?” said Jamboree. “I didn’t make that turn.”

He stepped on the brakes, but the car failed to slow. “Damn.”

Ozzie tried to unlock his door, but the lock refused to budge.

Jamboree pulled out his phone. “Yo, Herbert, this damn car has gone crazy. It won’t turn and it won’t stop. It’s driving its own self.”

Herbert asked the year and make of the car.

Herbert cleared his throat. “I told you to get an older car. Can you roll down the window?”

Jamboree pushed the button and the window opened. “Yeah.”

“Now,” said Herbert, “throw the hijacker into the gutter. A storm drain would be even better.”

Jamboree searched the street ahead, and spotted a drain. He hit it dead center with the hijacker, which disappeared down the hole.

“I’m rid of the hijacker, but the car still don’t stop.”

“Go another block and drop the phone out of the window so you run over it with the back tire.”

“I get it,” said Jamboree. “Electrical interference.”

Herbert cleared his throat. “Just get rid of the phone.”

Jamboree dropped the phone and looked over at Ozzie. “Electronics messing with the car.”

Ozzie wiped his forehead with his hankie. “I don’t have a good feeling about this.”

The Cadillac continued along West Forsyth Street and turned into the parking lot of the Police Memorial Building. It pulled next to the curb and stopped. Three police officers with guns drawn surrounded the car.

Jamboree got out and laid across the hood with his hands behind him.

As one of the officers put the plastic restraints around Jamboree’s wrists, he said, “You car thieves need to find a new business. The owner reported the car stolen, and we logged into its computer and drove you right here.”

“Dammit,” said Ozzie from the other side of the hood. “Like I said, you’d be better off using one of Miz Mimosa’s spells.”

Comments on this entry are closed.